The Smallprint Co. has been working recently with Nottingham Industrial Museum in a small way, in offering advice and support on their Albion and Cropper presses, which is a real treat!

We knew nothing of the museum when we first visited, which is housed in the stable blocks of Wollaton Hall. The place is filled with remarkable objects that tell the story of the industries that grew up in and around Nottingham and supported by a dedicated team of volunteers.

We were invited to attend the launch of their 40th Anniversary exhibition, of the first public steaming of the reconstructed Basford Beam Engine, which is a true feat of engineering, not least because it was transported piece by heavy piece to the museum 40 years ago (hence the exhibition).

A few weeks ago we were invited back again to take part in their working crafts weekend. Alongside weavers, knitters, blacksmiths and lacemakers, Chris operated the Albion in true Smallprint style, printing posters to use around the museum. Visitors were invited to have a go and we were overjoyed to be allowed to work the Albion.

The Cropper sadly, needs a little more TLC and has an unusual inking plate made up of two sections or discs (you can just make this out on one of the photos below). Until we see the machine operational we can only guess, but we think that the inner disc may rotate at a different speed. Looking forward to seeing it in action, in any case! 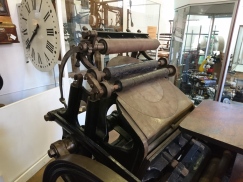 The unusual double inking plate on the Cropper Charlton

We’re very proud to announce that we’re partnering the Derby Book Festival this year with a programme of events related to all things bookish!

The festival, which is a little over a week long, runs throughout mid-June from June 9th – June 17th and happily coincides with the arrival of Paul Cummins’ Poppies: Weeping Window at the Silk Mill.

We kick off with two events on Saturday June 10th where you’ll find Chris at Derby’s first ever Book Fair in the Silk Mill with his trusty table top press and trademark bowler hat and I’ll be hosting a Beginners Bookmaking workshop. This workshop has already sold out but you can still book onto other sessions which are held on a regular monthly basis – check out our Eventbrite page for more details.

We’re holding two Letterpress Bookplate workshops on June 15th with the evening session also having sold out, but never fear, places are still available for the afternoon session, 1-4pm!

Saturday 17th June is the final day of the book festival, and Smallprint’s second Open Day of the year. Join us throughout the day to view Christine Stangroom’s prints entitled Footprints and Matt Edwards beautifully bound books and origami sculptures. You can also have a go at printing on our proofing press and browse our little shop.

Matt is also hosting a bookbinding workshop during the latter part of the day, which we’re thrilled about and is a fantastic opportunity to learn simple case binding with. Matt will be teaching the basics of a simple, single section case binding technique and attendees can expect to take away a beautifully bound hard backed book for their collection.

When he’s not Curator for Visual Art and the Joseph Wright Study Centre at Derby’s Museum and Art Gallery, Matt is a Conservation, Restoration and Artist’s Book Maker. Examples of Matt’s work can be seen on his blog and he can often be found over on Twitter @MattBookbinding.

We hope to see you during this absolutely fabulously bookish week! 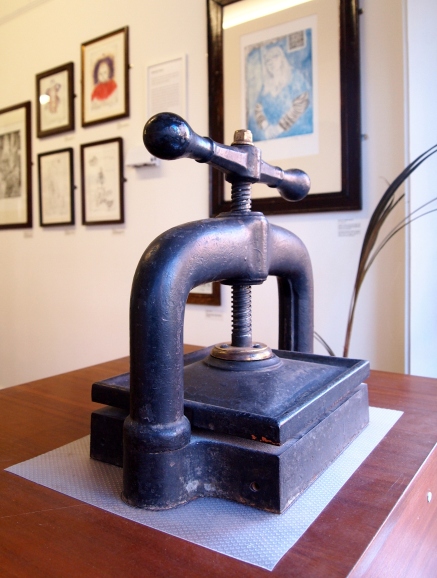 Chris is in the Composing Room 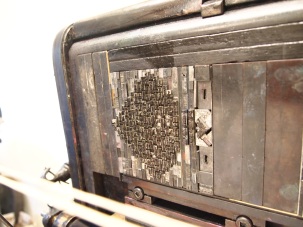 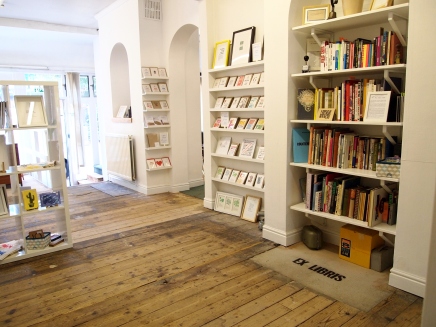 At the end of last year we welcomed Daniel Dytrych to the studio for a photographic interview that is featured in his latest project, the Derby Makers Project. Dan’s stunning work captures people and places in a naturally captivating way without feeling that you’re the subject.

The Derby Makers Project documents the craftspeople in and around Derby. You can read the full interview here.

Earlier this year the Bodleian Libraries’ Centre for the Study of the Book announced its ‘Sonnets 2016’ project to commemorate the 400th year since the death of Shakespeare. Printers across the world were invited to take part by reproducing one of Shakespeare’s 154 Sonnets. Those who responded early got their pick first, with most of the more famous and recognisable ones getting snapped up quickly. Within a very short space of time all the Sonnets were assigned and we were fortunate to get Sonnet 48 (not one I was familiar with but one I have since got to know rather well).

The brief was very open, a lot less prescribed than some collaborative print shows I have taken part in. All that was required was that the process must be a form of relief printing, with the paper size and edition left down to the printer’s discretion. My initial thought was ‘this is going to be easy’, but I was to discover that sometimes having a wide open brief can leave you staring blankly at a clean sheet of paper.

The more I thought about this, the greater the expectation I had for the print. After all, this is a unique opportunity to contribute, in however small a way, to Shakespeare’s legacy. This print is going into the Bodleian Libraries forever, so this has to be something special.

2016 has been a busy year for Smallprint Co. Mainly because we moved our studio and set up a small gallery/shop, together with doing the day-to-day business. The summer galloped by and very soon a warm September was racing towards me. The deadline for the Sonnets 2016 was the 30th, so with this in mind, it was time to sharpen up the pencil and get the final sketches together.

Choosing a typeface was the first decision, though in the end I opted for one which I often default to. It’s a beautiful ‘old style’ and it has the advantage of being a substantial full font with little risk of getting ‘out of sorts’. This was one of my unlabeled cases that I acquired a couple of years ago, and through a degree of detective work I have identified as ‘Jenson’ 12pt, a foundry typeface by Stephenson Blake and based on William Morris’ Golden Type.

Reading over the sonnet I tried to get some inspiration for the form. Shakespeare makes reference to keeping love locked in a chest and this led me to develop an idea around a box shape form for the text. I didn’t want it to be too literal and began with setting the type fully justified in the centre of the sheet. I didn’t think that it lent itself enough to the ‘box’ idea, but then thought about spinning round to form a neat diamond. This of course raised more challenges in calculating the increasing and decreasing line widths, making sure to avoid too many hyphens and rivers. Several adjustments were made over a couple of days as it always helps to walk away from a job and look again with fresh eyes. It seemed that each time a line was altered the changes cascaded down the text making more adjustments necessary, a river would form or a line would look ragged or too condensed.

The final print was produced in an edition of 20 on Somerset cotton paper, with one copy submitted to the Bodleian Library and the remainder available to purchase. In the end it was a pleasure to work on and gave me the chance to try some new tricks and experiment with structure. I hope you enjoy the final print. 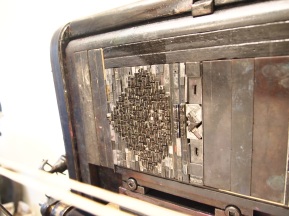 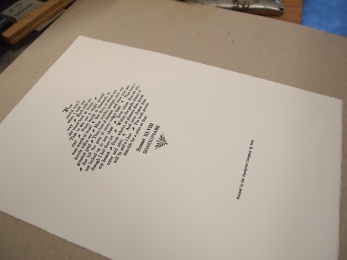 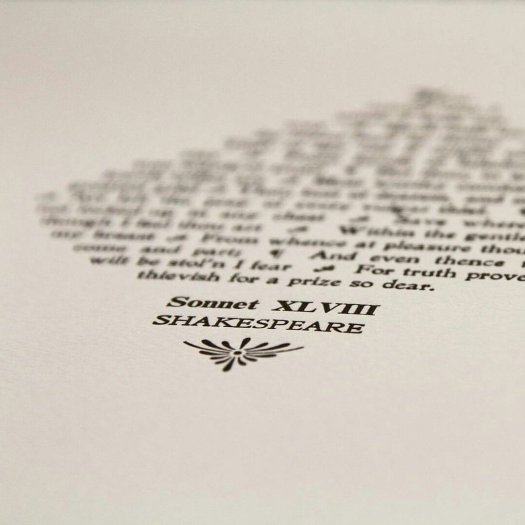 Photograph by The Bodleian Library

If you are interested in owning a copy, details can be found here.
You can follow The Bodleian’s blog on all the sonnets received from around the world here

We have a call out for a new Mail Art project with a nice long deadline (so don’t panic!).

Based upon the new dictionary definition ‘post-truth’, we shall be exhibiting the results in our gallery space in October 2017.

The Oxford Dictionaries Word of the Year is a word or expression chosen to reflect the passing year in language.

Post-truth has been nominated as the Oxford Dictionaries Word of the Year 2016 and is an adjective defined as ‘relating to or denoting circumstances in which objective facts are less influential in shaping public opinion than appeals to emotion and personal belief’.

Full details can be found here and we look forward to receiving your contributions!

The Smallprint Co. is pleased to bring Seventy Years by Anna Johnson (Printmaker) to The Gallery, kickstarting our exciting exhibitions programme for 2017.

The exhibition shows self portraits by Green Door Printmaking Studio‘s Creative Director, Anna, which have been created over the last 70 years at odd moments in time, in various media.

The images are all translated into etchings using alternative techniques on different metals. They reflect fleeting moments and moods, some from long ago. Included are notes and fragments of books being read at the time, just as they were in the original sketches.

Also included in the exhibition are a series of photopolymer etchings entitled ‘Parts of Me’ that were featured in Green Door Printmaking Studio’s recent collaborative exhibition, ‘Worn’ (The Old Station Gallery). This series of etchings emphasise the effects of passing time on the artist’s skin. 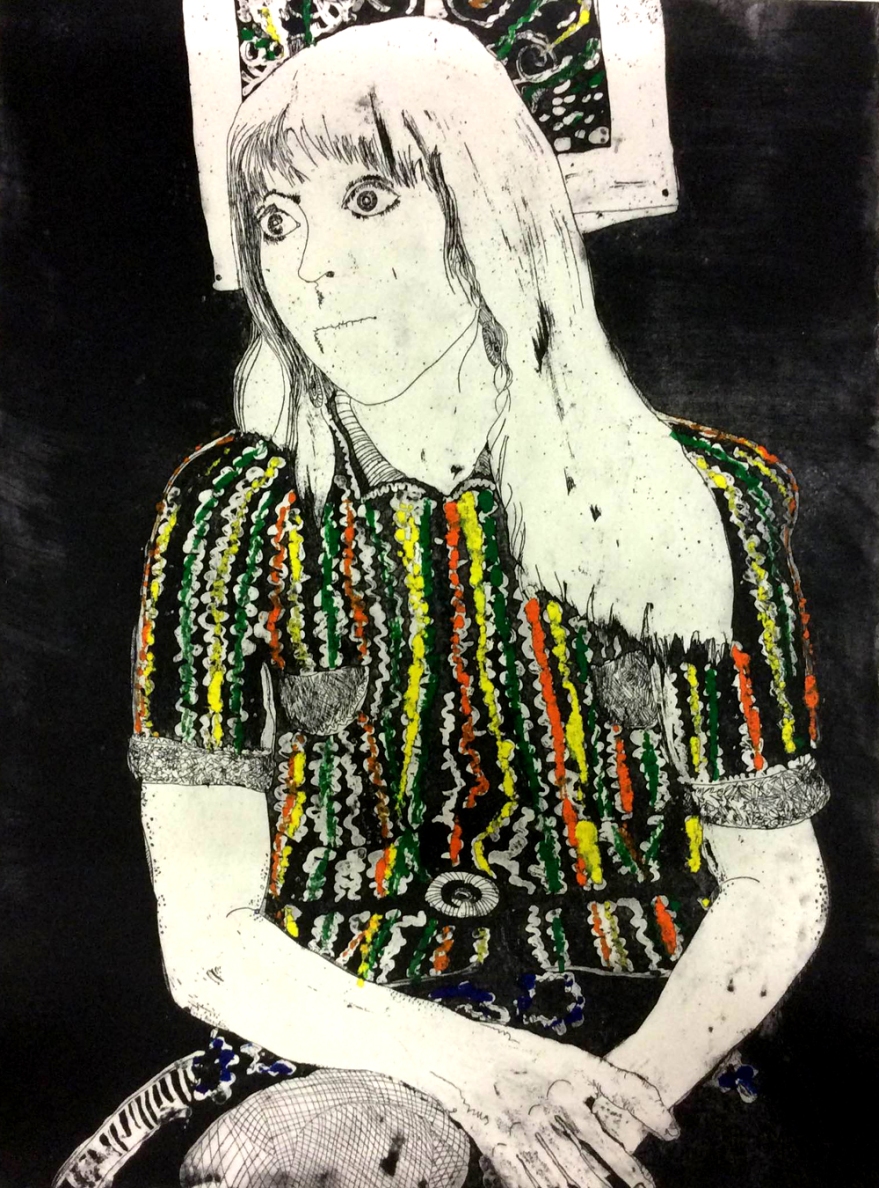 Calling all newly weds! You may be wondering what the perfect gift is to give your beloved for your first anniversary. Traditionally it is a paper gift, and cotton in America.

Look no further… The Smallprint Co. will hand print the perfect paper gift for happy couples and all you have to do is supply the text. What’s more, we print on cotton paper, so we’ve got all bases covered!

Popular ideas include wedding vows or a reading, first dance lyrics or an excerpt from a favourite novel or poem. Of course, the content is completely up to you!

Another wonderful idea for a personal gift is to book a letterpress session for the both of you. Choose a time to suit you both – from Monday to Saturday and in the morning, afternoon, evening. Spend 3 hours together learning to compose and print your chosen text – and you get to take the print away with you too. 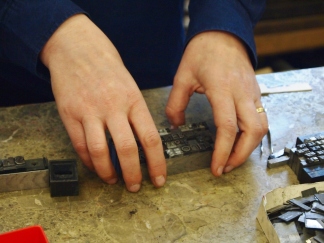 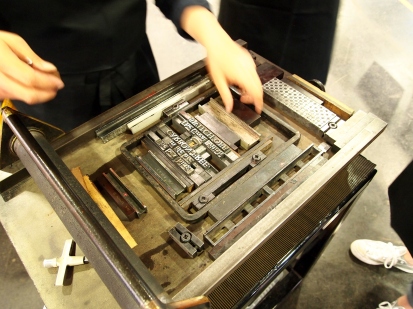 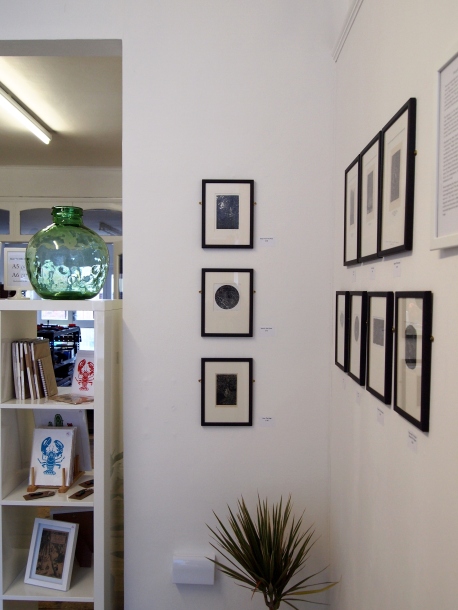 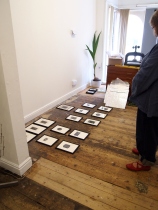 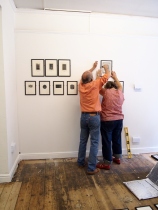 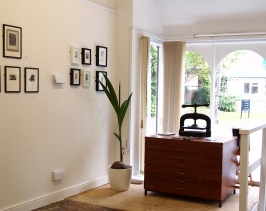 We’re looking forward to announcing a full schedule of exhibitions to run throughout 2017 in The Gallery, following on from Rob Chapman’s Wood Engravings. 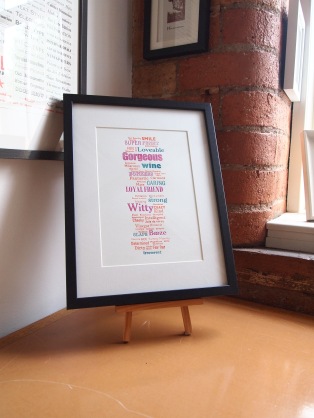 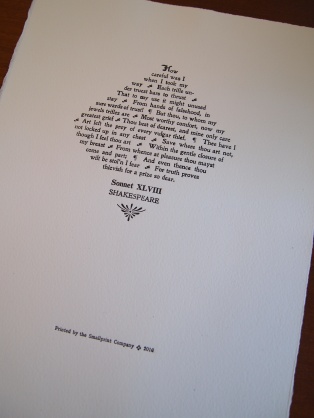 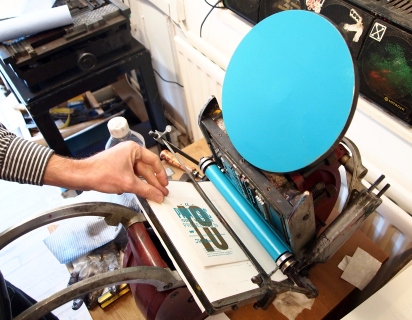 Are you looking for the ideal gift? Our gift vouchers are perfect for the creative person! They can be redeemed against commissions, workshops, or Smallprint’s cards and paper goods including prints… What’s not to like?!

To order please fill in the form below and someone will be in touch.